Monthly report for the first month of 2015, January, is here. There’s more to be documented than in December, but the budget is still “behind the schedule”, to say it softly. My main priority right now is to finish, close and monetize two cilent projects “I’m working on” for far too long already. 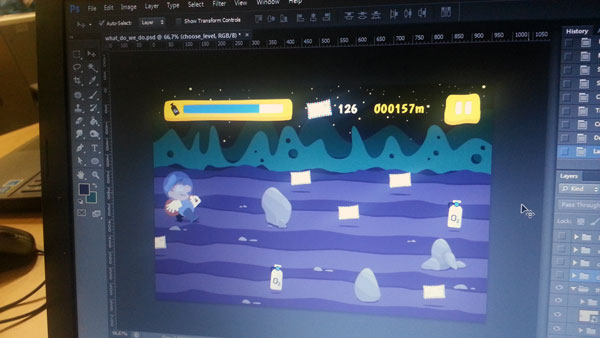 We’ve reskinned Hungry Fridge in January, so it looks more consistent with the latest games – it’s just a lot better! I hope you like the new design too. We have also created a demo/prototype game Postmen of the Galaxy during the Poznań Game Jam. Hey, it’s more of the “our own games” work done than in the past few months, so it’s definitely something!

Short coverage from the Global Game Jam in Poznań and from the FOSDEM event. Both were great and I’m happy I was able to attend them. During Poznań Game Jam I gave a talk and was promoting HTML5 gamedev among fellow developers while at FOSDEM I was helping with the Mozilla booth and talking at the DevRoom. Enjoyed both, but let’s rest a bit and focus on the coding again.

I was a little bit sad about the very slow increase in the number of Gamedev.js Weekly subscribers (the “almost 3000” is still around 2900), but I wasn’t promoting it too much (beside the events), so it shouldn’t be a surprise. I was even thinking about cancelling it for the unknown future, because being up-to-date with the HTML5 gamedev news almost every single day to have the newsletter full of good quality content started to be a little demanding after a year of doing so. I finally decided to continue and try to monetize it a bit more than just covering the costs. Ultimately I was able to do it and I’m quite happy with the result. We’ll see how it goes in the future, but for now it’s pretty good.

I started as a tech reviewer on a gamedev book. Another challenge and new experience after writing my own chapter in the print. I want to write my own book someday, so it’s a good start.

I’ve also become a Mozilla Rep. Theoretically I was accepted in October, but because of some human-related issues it started to work just now.

Finishing client work. One of the projects started in August and was suppose to be completed by the end of September, but it’s still unfinished. Of course without me being paid, d’uh. All I want now is to make my own games and become a Tech Evangelist someday, so I don’t have to worry about those type of problems anymore.