Last week, on Tuesday October 20th, we had a W3C Games Community Group meeting at TPAC 2020 that was held online, and I was talking about Web Monetization in HTML5 games. 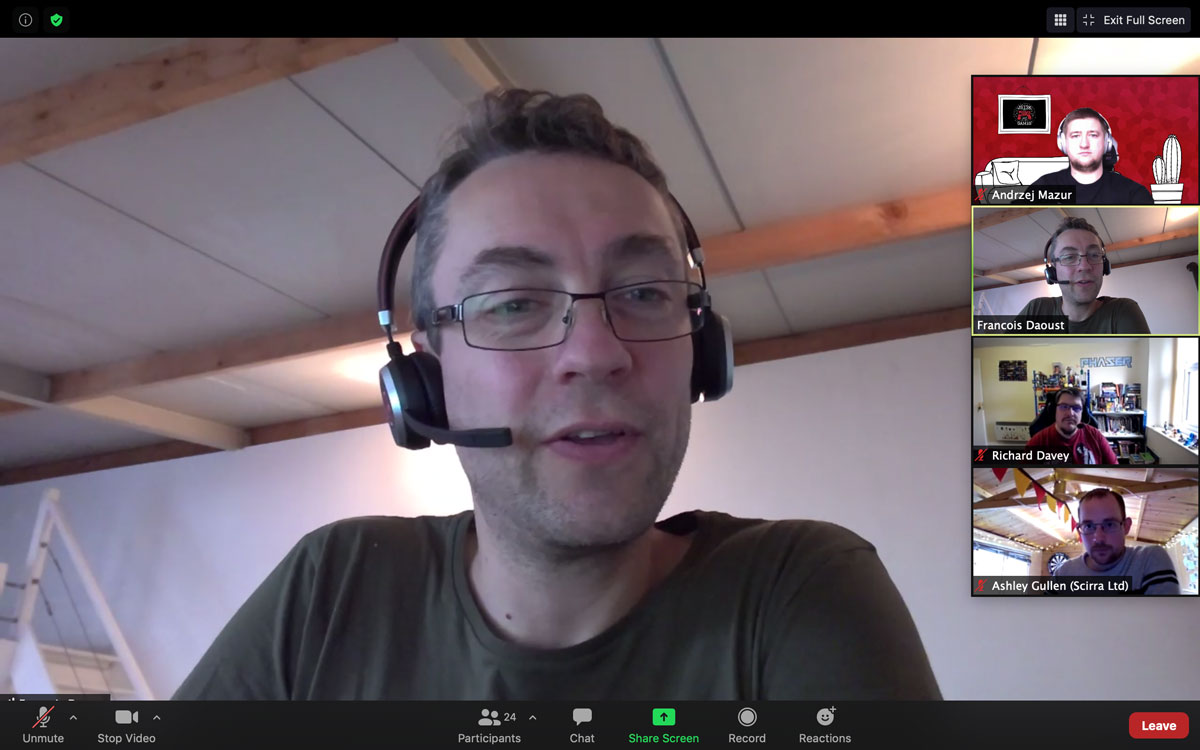 TPAC 2020 was held online because of the pandemic, and I think I wouldn’t be able to attend if it was otherwise. Anyway, it was great to see our W3C Games Community Group was revived after a few months, and we could have a video session together - we ended up with about 25 people in the call. François Daoust led the efforts from the W3C side, and Tom Greenaway from Google along with Noël Meudec from Facebook were helping out. 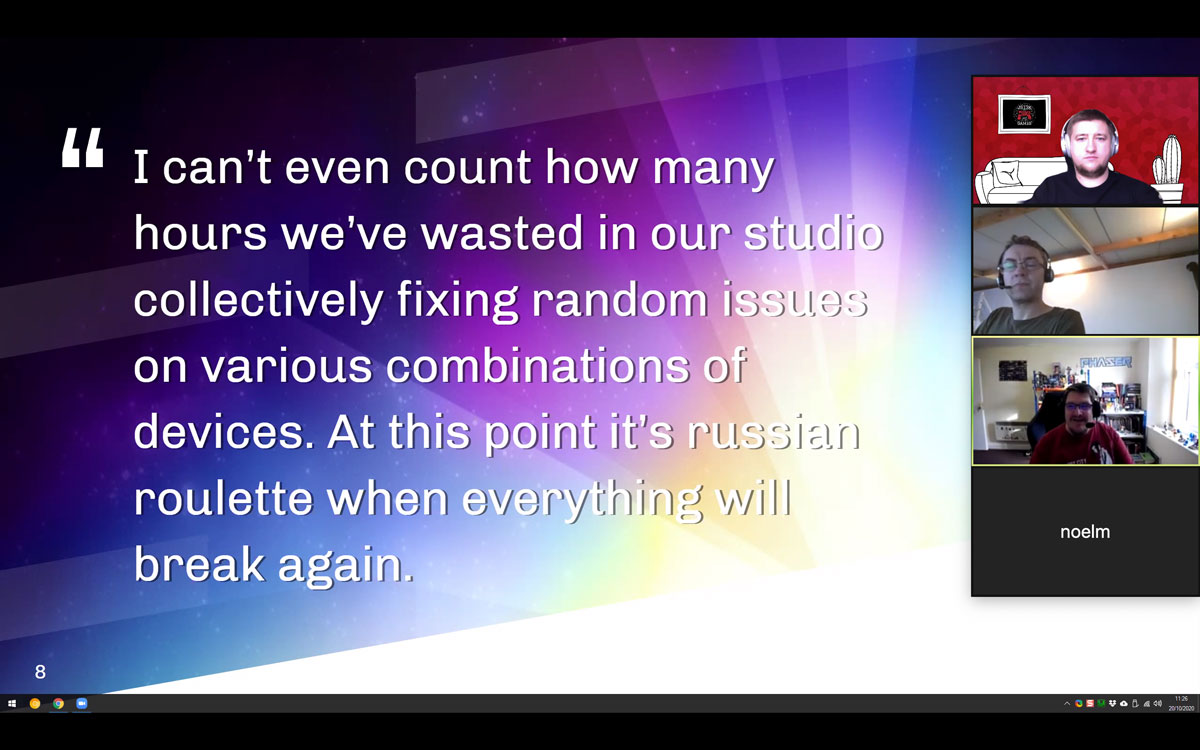 We had a few short talks scheduled for the meeting: Noël went through the current status of Facebook Instant Games efforts, Richard Davey (the author of Phaser) talked about the struggles developers are currently facing, and Tom picked the discoverability topic introducing his Open Mini Games project proposal.

You probably already know the story: I was at the W3C Games workshop in Redmond last year, where I talked about Indie perspective on Web games. I compared the year 2011 (previous W3C workshop at onGameStart in Warsaw) with 2019, and after a research in the community, I concluded that the two main issues developers struggle the most right now are discoverability and monetization. 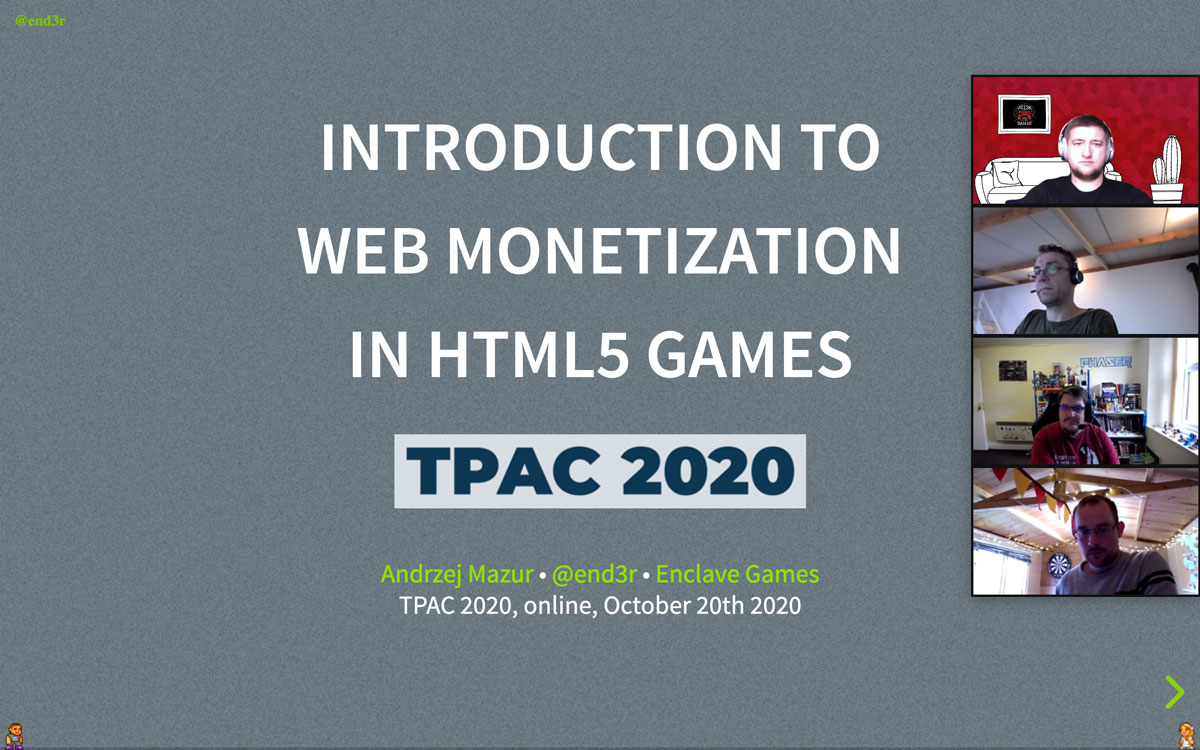 All this was the base of my status update which I gave at the meeting. As you can see - A LOT had happened with monetization of HTML5 games from my perspective since the 2019 workshop in Redmond. Plus the Defold folks got the grant and are launching Web Monetization Challenge, and Richard Davey got the grant for developing Web Monetization plugins for Phaser, and even more exciting stuff is coming.

In the second part of my talk I went into showing the technical details of Web Monetization, and explaining why I think it’s the future of payments on the Web, especially for games. The video of the talk should be up in the next few days - I’ll update this post to add it when it’s ready.

We had really cool discussions afterwards, and agreed to continue our efforts split into three main areas: stability/debugging/devtools, discovery, and monetization.

The first one would involve collaborating with W3C’s Working Groups like WebMedia, WebRTC, or Web Transport. Rich and Ashley Gullen (Scirra / Construct) will also collect issues related to the Web platform itself, which can help move things forward as well. We might use HTML5 Gamedevs forums for that. The second one, discovery, is Tom’s domain, and he will focus his efforts on the Open Mini Games project. Third and the last is monetization, which I’m gonna lead myself, with the help from Björn Ritzl (Defold). 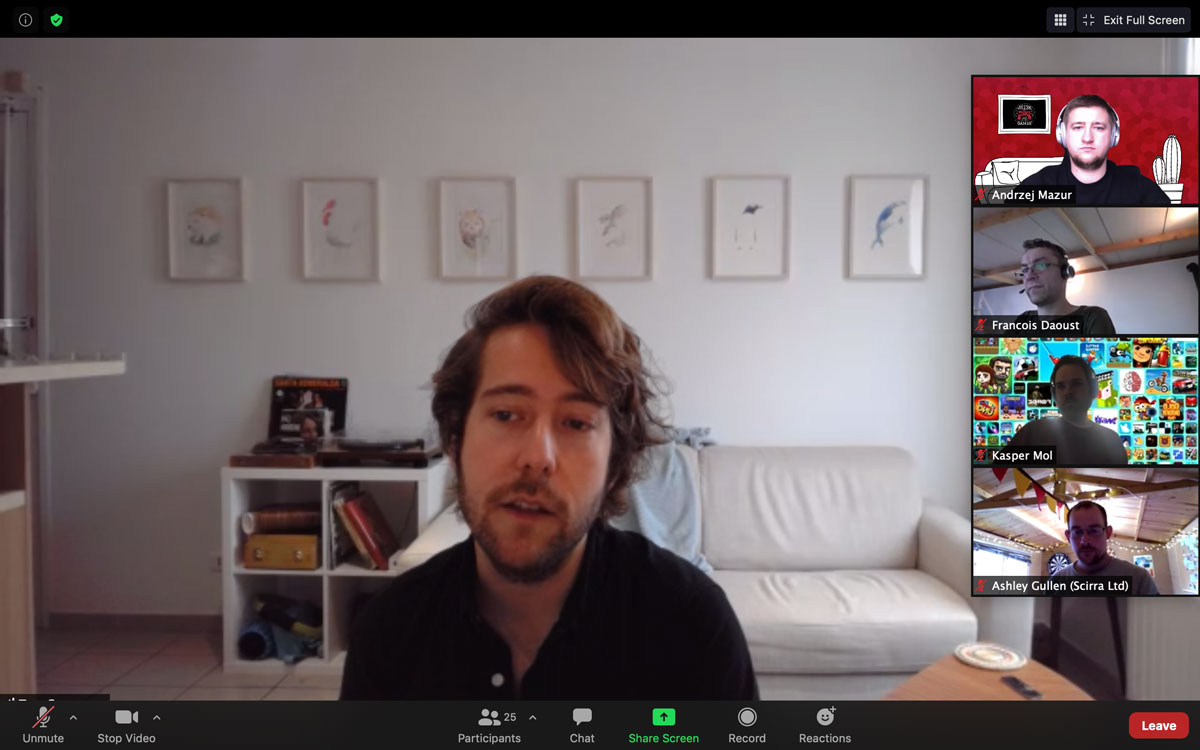 Web Monetization was mentioned many times in other talks and discussions that day, so we will make it the main topic for the next meeting, which is going to happen December 15th. We’re also planning to have them bi-monthly from now on. Before that happens, me and Björn will try and check what’s the actual status of the Web Monetization API standard proposal to share this info back with the folks.

I’m really excited to see this group active, and I hope Web Monetization will continue to be an important aspect of the discussions!