This is going to be a weird (but not sponsored!) blog post where I brag about a whole lot of cool swag I got from one particular company, and almost all because of one perticular person, so I’d like to officially thank him for that. 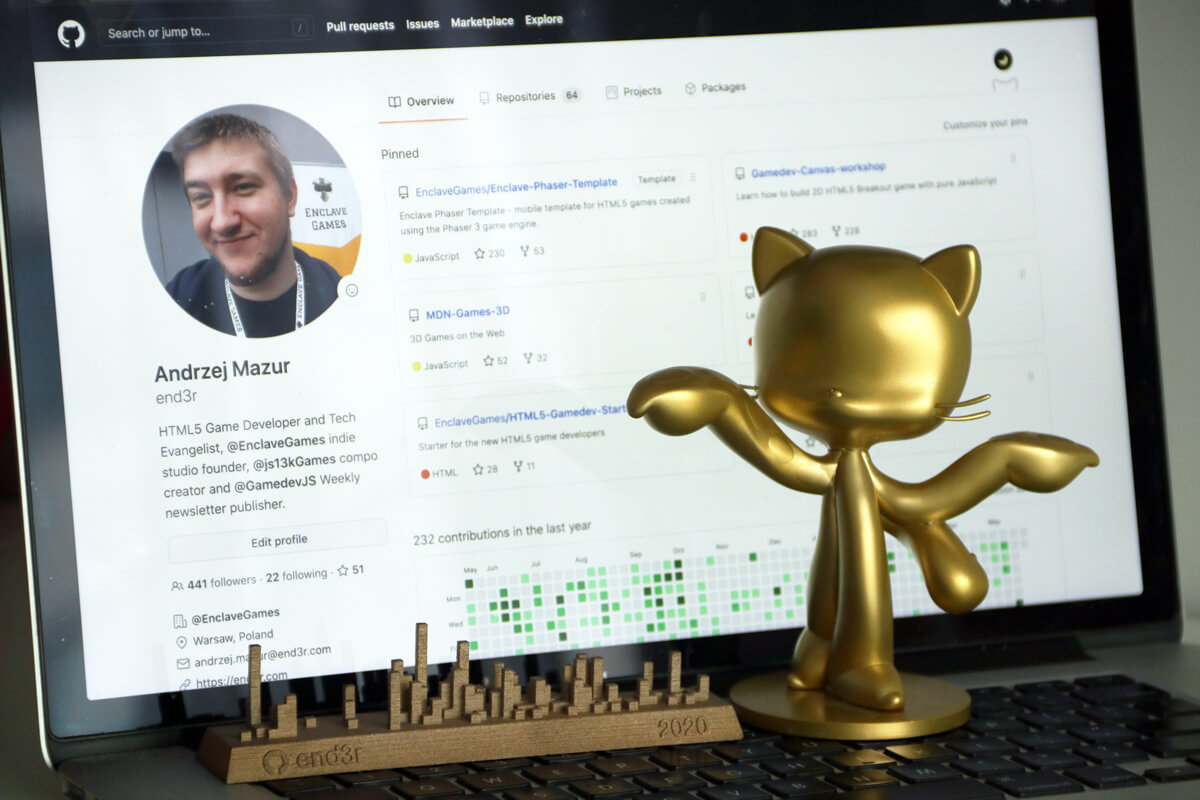 We know each other for a few years: Lee Reilly is supporting the js13kGames competition with regular blog posts and tweets from official GitHub accounts.

I think the only one time we met in real life was when I went to San Francisco for Mozilla’s All Hands in June 2018. I had an awesome tour around GitHub’s main office in downtown SF checking all the creatively designed interiors, including The Secret Room. 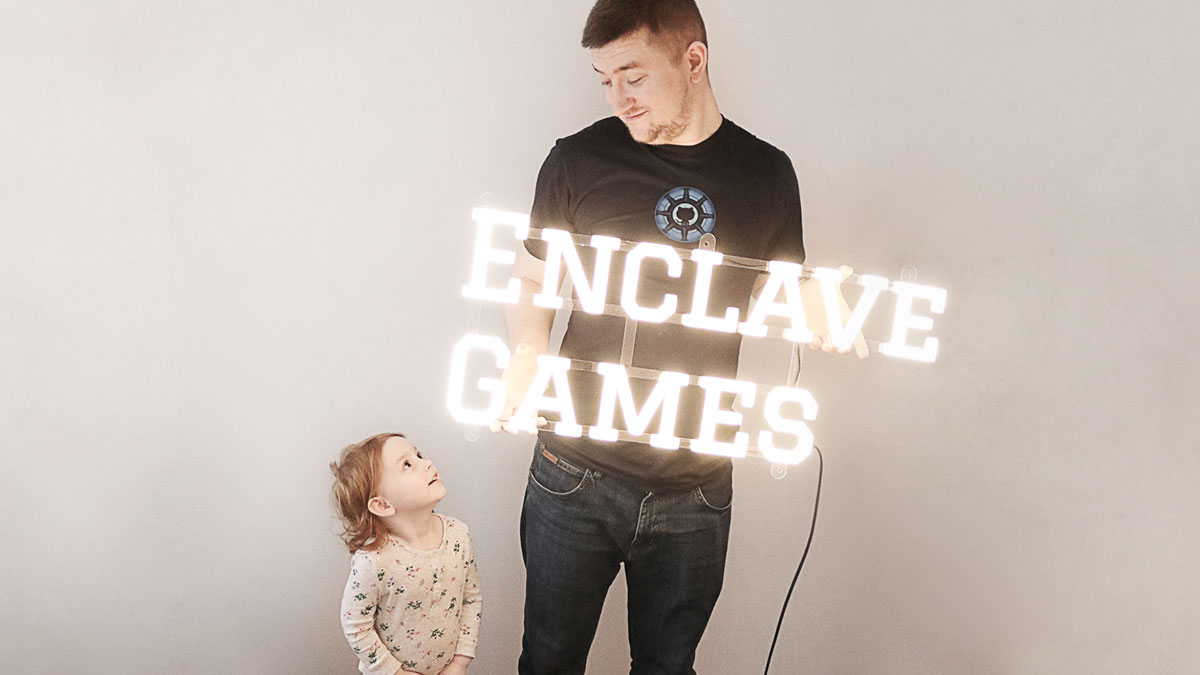 I got one of the cool t-shirts, the Arctocat, from their on-site shop as a gift when I was leaving as well - it ended up as the one we used for the original TataDeveloper photoshoot.

Since I was getting the yearly shipments of stickers to be distributed among js13kGames competition participants, I was also getting some bonuses: more t-shirts (Questocat, with “Commit to an adventure” on the back) and even a GitHub hoodie (I’m still using it regularly to this day). 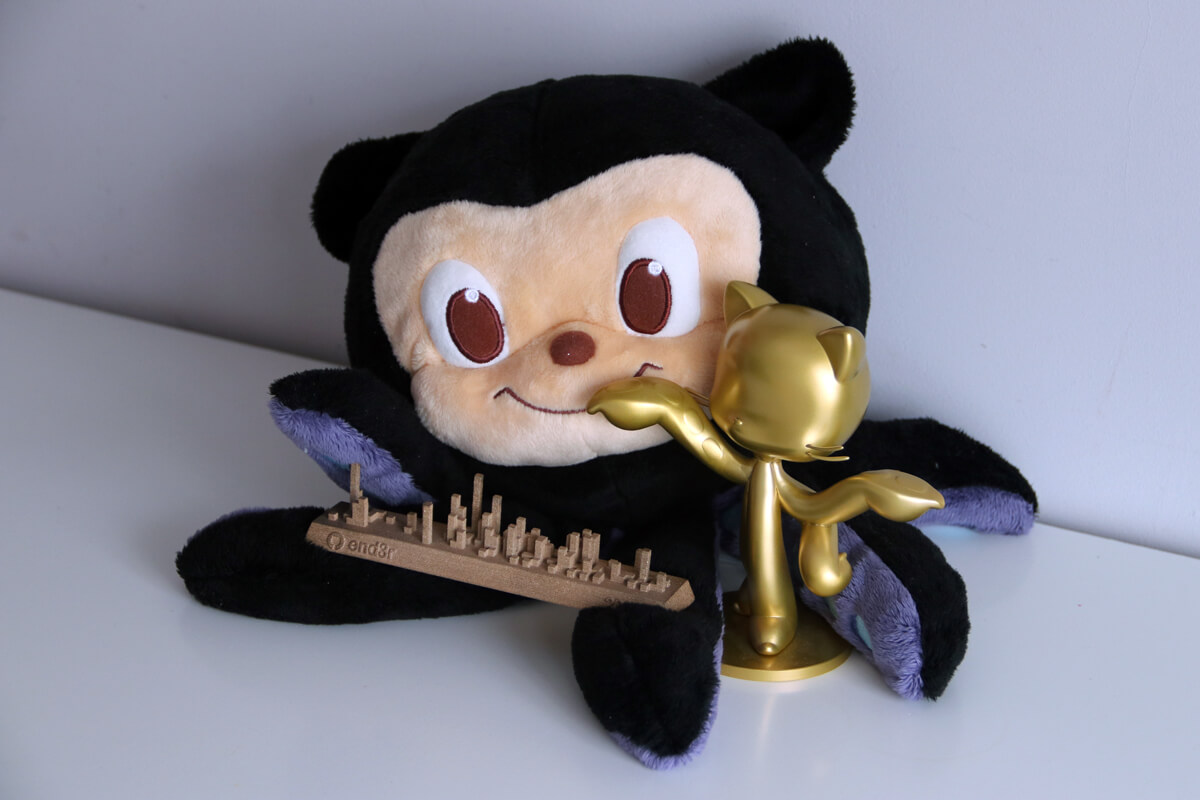 With the latest js13kGames package I did get something even more cool - a plushie for Kasia, my daughter. Mona, the Octoplush mascot, is one of her favourites, and usually sleeps with her surrounded with other “besties”. The package wouldn’t be complete without another t-shirt, and so I have the Grim Repo one.

Thanks to Lee, I got introduced to Michelle Mannering, who then became a js13kGames expert just like Lee for a few good years has been. Michelle was running the Open Source Friday streamed live on GitHub’s Twitch channel, where I was talking about the competition last year. I remember waking up super early, because the stream was happening around noon in Australia. 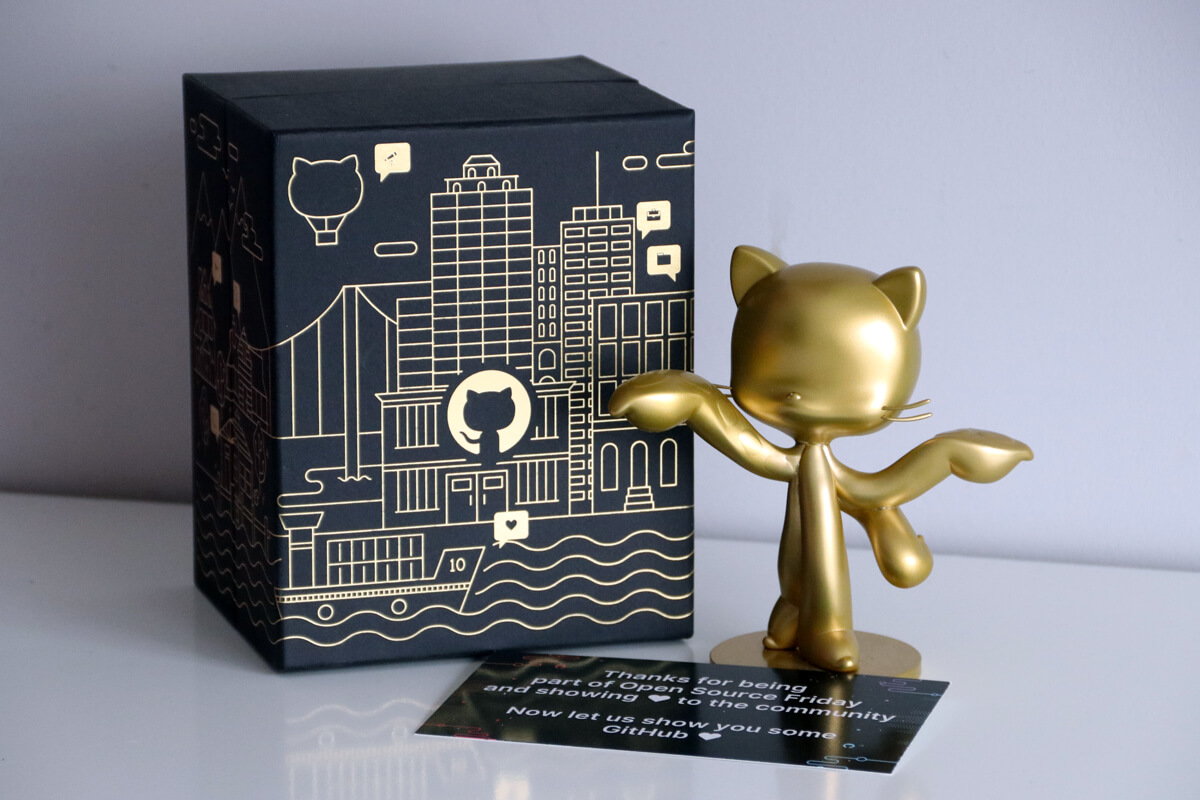 Beside the obvious fame of being the Open Source Friday guest, some time later I also received a package that contained a Tentocat figurine and a mug. Tentocat celebrates ten years of GitHub - little sculpture is made from plastic and looks really nice. Plus its packaging is one of the the best I have ever seen in any gift I’ve received so far. 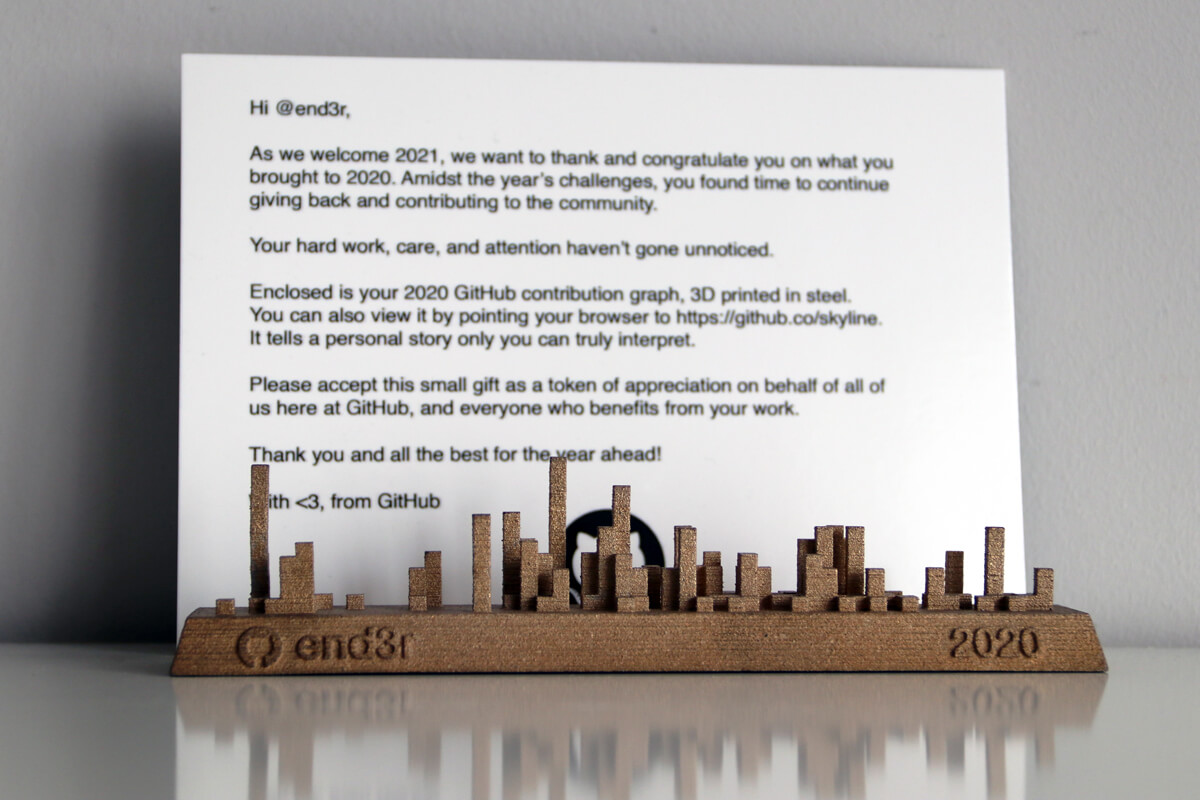 The last swag I got very recently is the Skyline - a metal print of someone’s GitHub contributions from a given year, day by day. It literally looks like a city’s skyline, which is really impressive. I don’t feel like a particularly active pusher of commits, but it looks quite decent, so I’m not gonna complain.

All this is next level swag (especially if it’s customized for you specifically), but it’s not only about the physical items you can get. The appreciation of your contribution to the Open Source community by getting random gifts “just because we can” makes you feel visible and important, especially from GitHub, which is the biggest source code hosting and collaborating platform in the world. 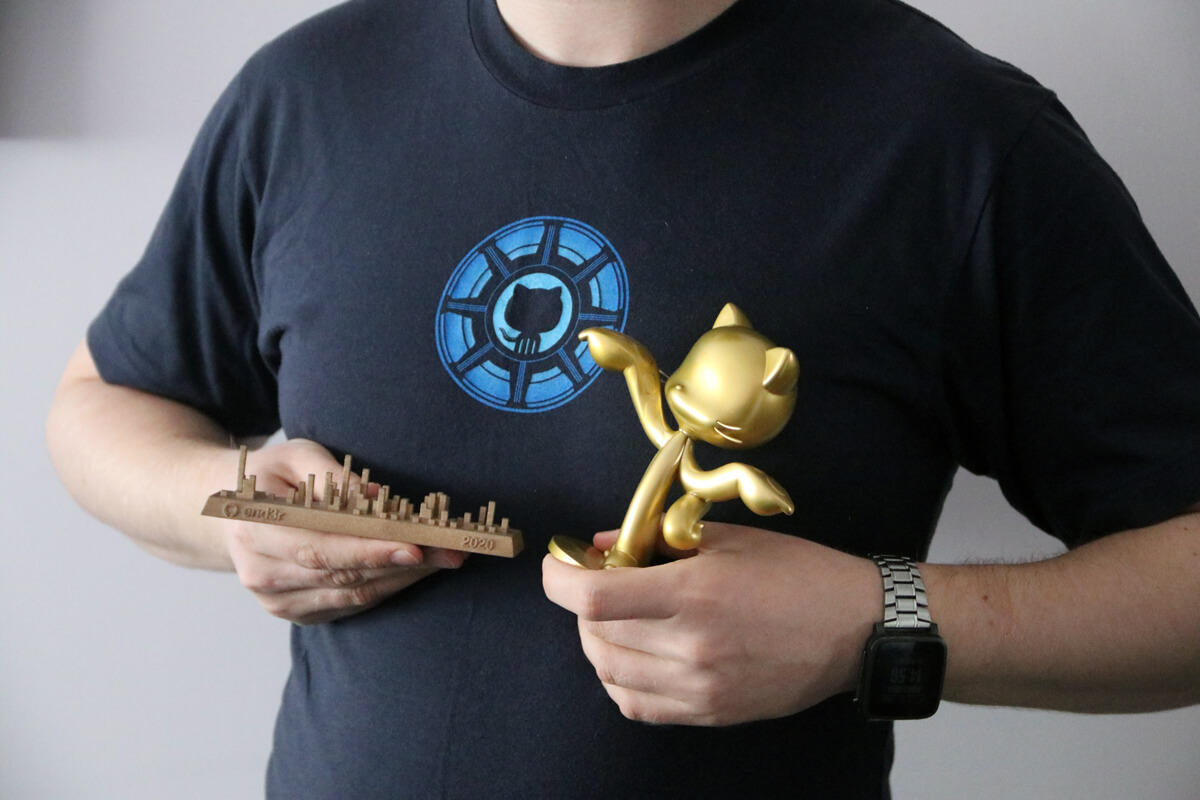 Those gifts are not the most important part, but only an addition to the general message, which can be interpreted as “we care about the community”. Maybe it’s just my vanity, but I’m so happy knowing I’m appreciated for what I’m doing.

I know I don’t run a highly popular Open Source library (Enclave Phaser Template have only 200 stars), but I’m doing my best to share what I build, and I’m fostering the js13kGames community where participants publish source code of every single competition entry over the years on GitHub, which is something.

My impostor syndrome is kicking it way too often, but I hope I’ll pass that enthusiasm to as many people in our community as possible, and they will realize they are building cool stuff as well.