I wasn’t planning much for October, but ended up with a whole lot of online events I’ve attended and actively participated in over the past month. 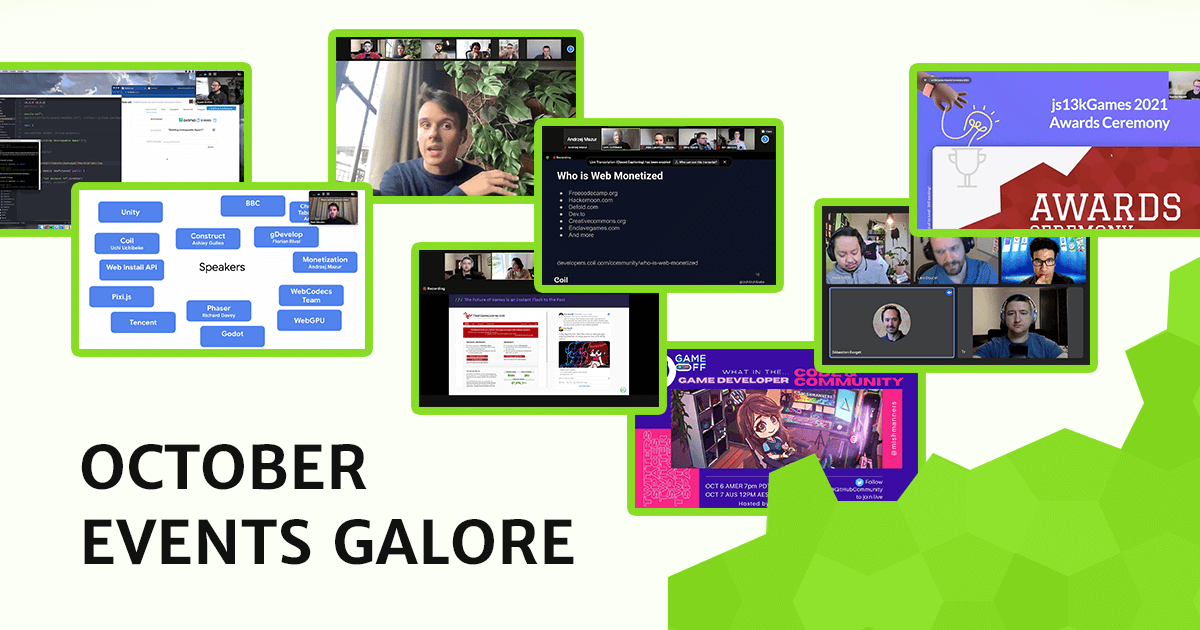 It started with the js13kGames 2021 Awards Ceremony on October 5th, where we announced the winners of this year’s js13kGames competition. 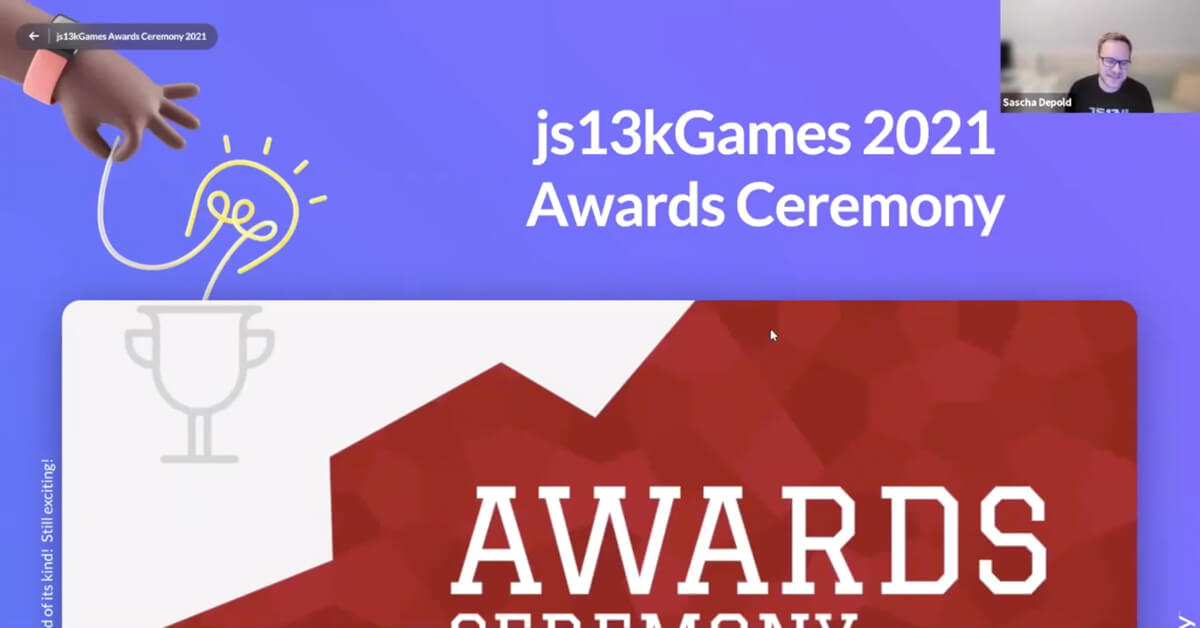 Sascha Depold was hosting the meetup, and beside presenting the top10 overall entries, we also had some cool discussions from the authors, and experts giving feedback. After the official part we also had a quiz with prizes.

The first session out of four that were planned for the Gaming Guild in Kernel Block 4 hosted as usual by Paul Gadi was held with Austin Griffith the next day, on October 6th. 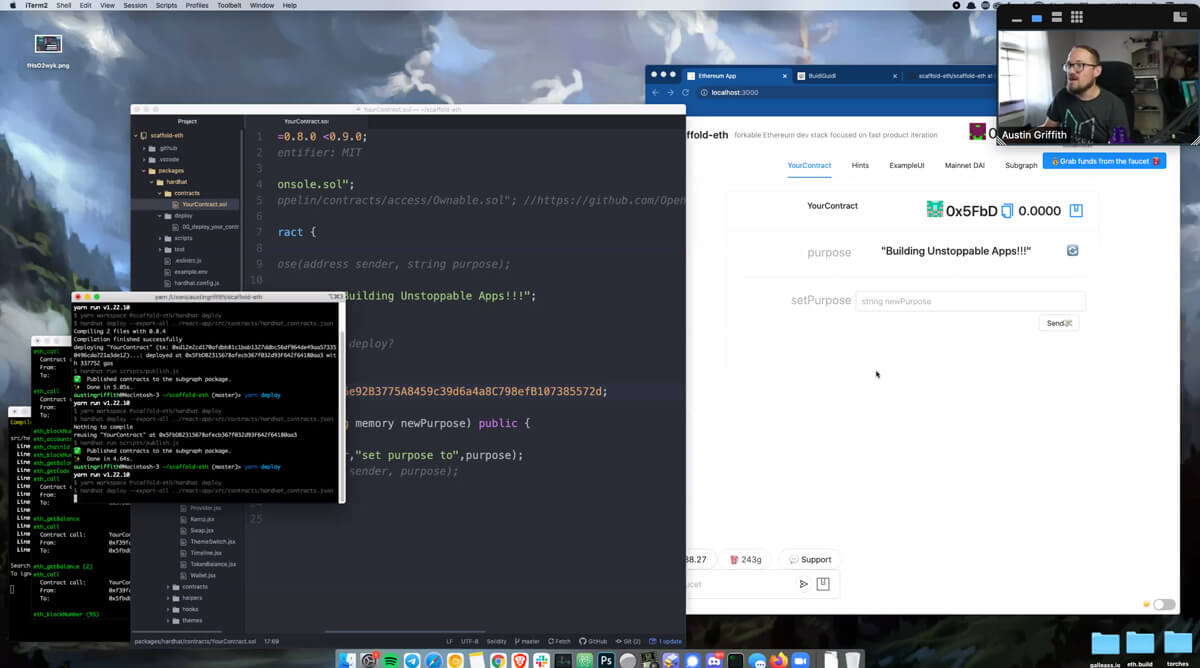 We had some nice conversations about blockchain gaming, and he showed us some of his famous tools like scaffold-eth in action.

This one was audio-only as we gathered around Twitter Spaces on October 7th (4 AM my time!) hosted by Andrea Griffiths from the GitHub Community, with Theo Browne and me as guests, and Michelle Mannering as a guest/co-host. 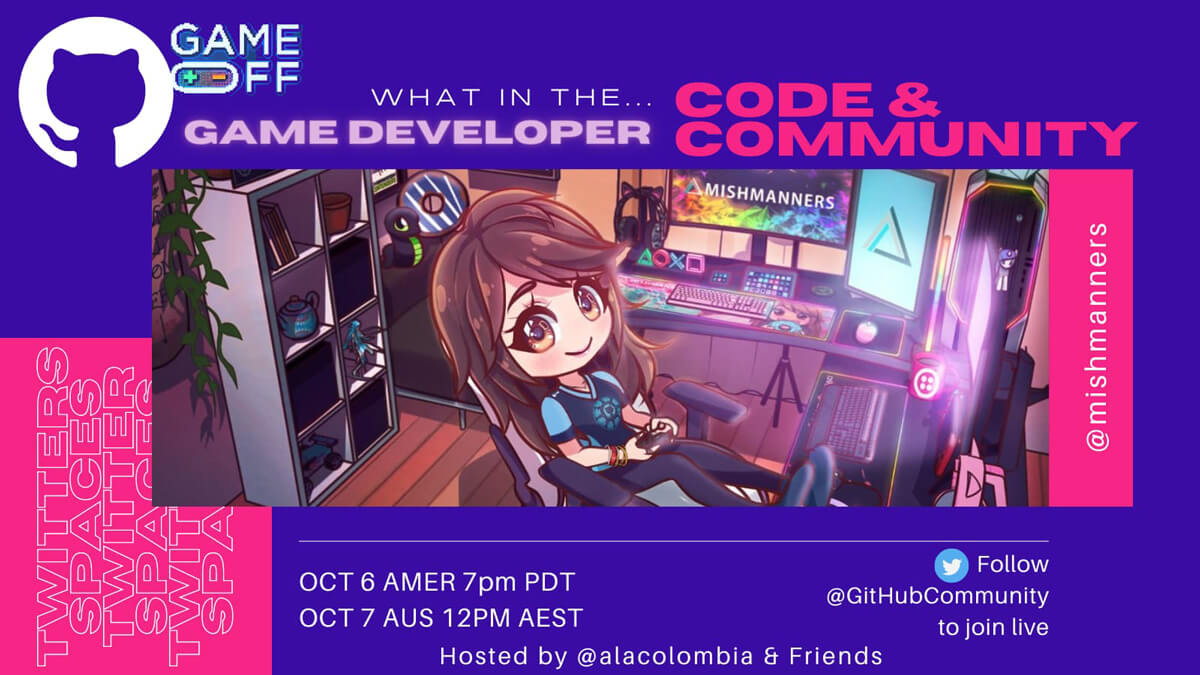 We’ve talked about game development, game jams and competitions, and programming in general.

As part of the Kernel Gaming Guild during Kernel Block 4 we had a very interesting discussion on October 11th about “native” games deployed entirely on the blockchain. 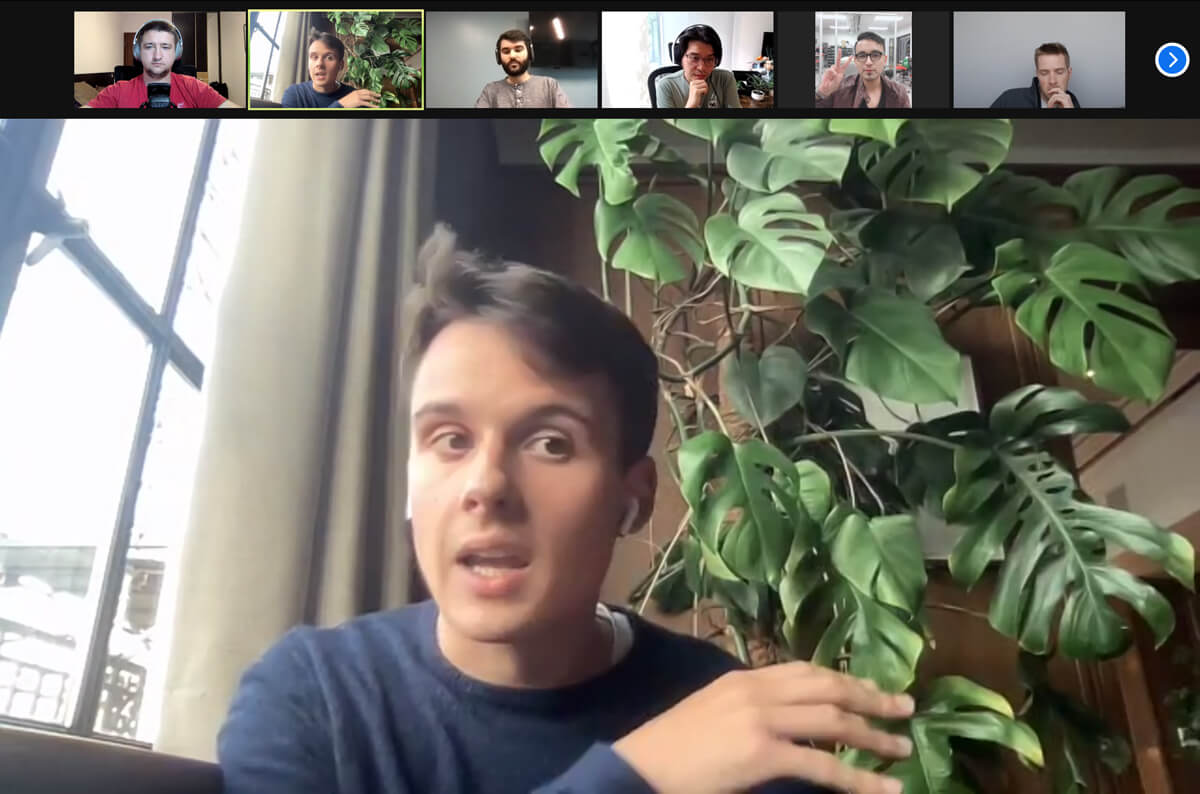 Justin Glibert was sharing his experience talking about the benefits and constraints of having a whole engine created for/on chain.

A few days later TPAC 2021 was held, and I joined two sessions - the first one was all about the Web Monetization API on October 19th led by Uchi Uchibeke. 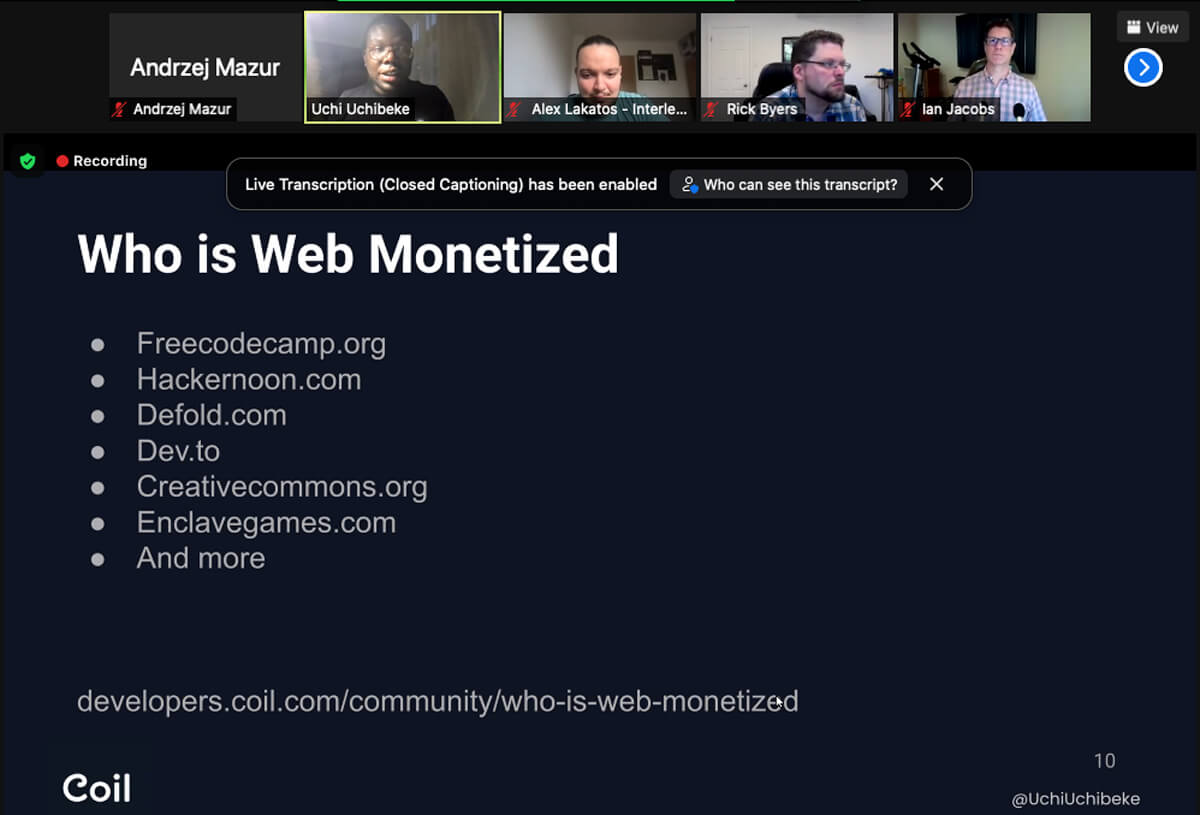 It was a good opportunity to catch up on the recent changes, new proposals, and plans for the future.

Second Gaming Guild session from Kernel Block 4 led by Paul Gadi was held on October 20th with Lars Doucet as a guest. 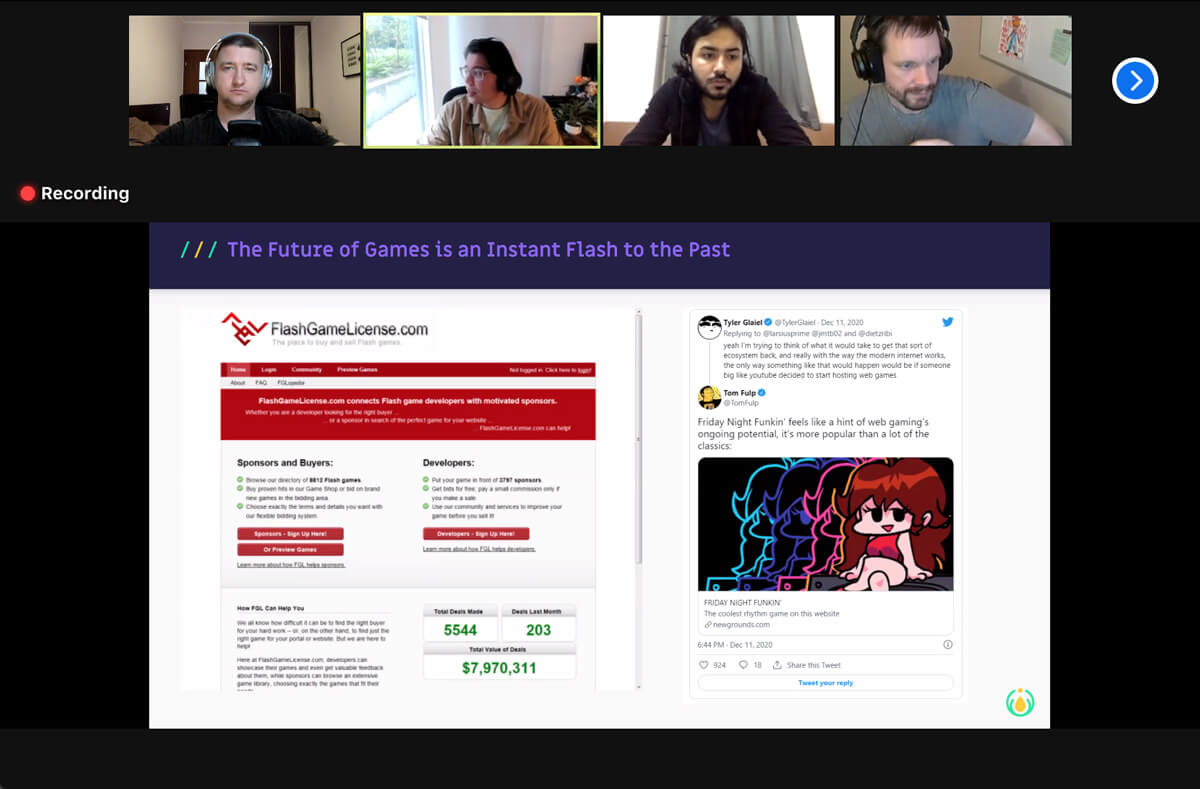 Another brilliant mind talking about creator economies, benefits and dangers of NFTs, and the ability to fork an open source project along with all the assets it offers if it drifts in a wrong direction.

We had bi-monthly W3C Games Community Group meetups after TPAC 2020 regularly over the past year, and now it was a good opportunity to meet at TPAC 2021. 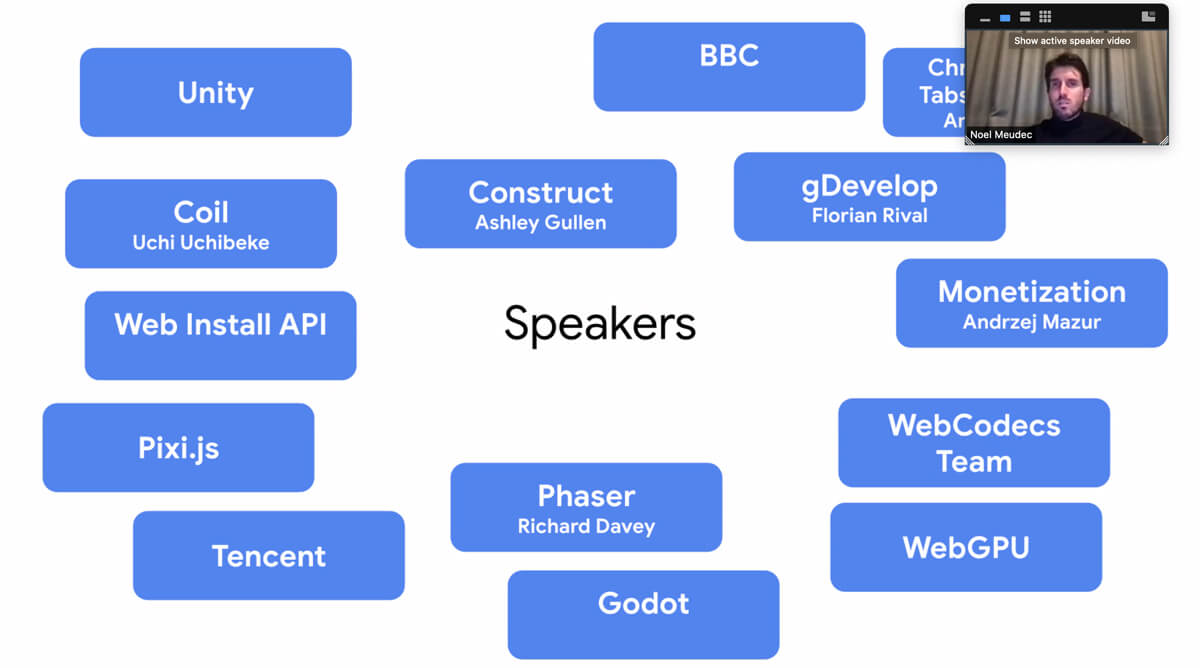 On October 26th we were suppose to have three hosts, but ended up with Noël Meudec alone, who led the session even though is was the middle of the night for him. We’ve discussed what we were able to achieve in 12 months, what’s there to do ahead of us, and had an extended questions and answers session afterwards.

I’ll be joining a panel discussion with Chase Freo, Lars Doucet, and Sebastien Borget hosted by Robby Yung about Web gaming during the upcoming GamesBeat Summit, and we had a preparation call on October 26th. 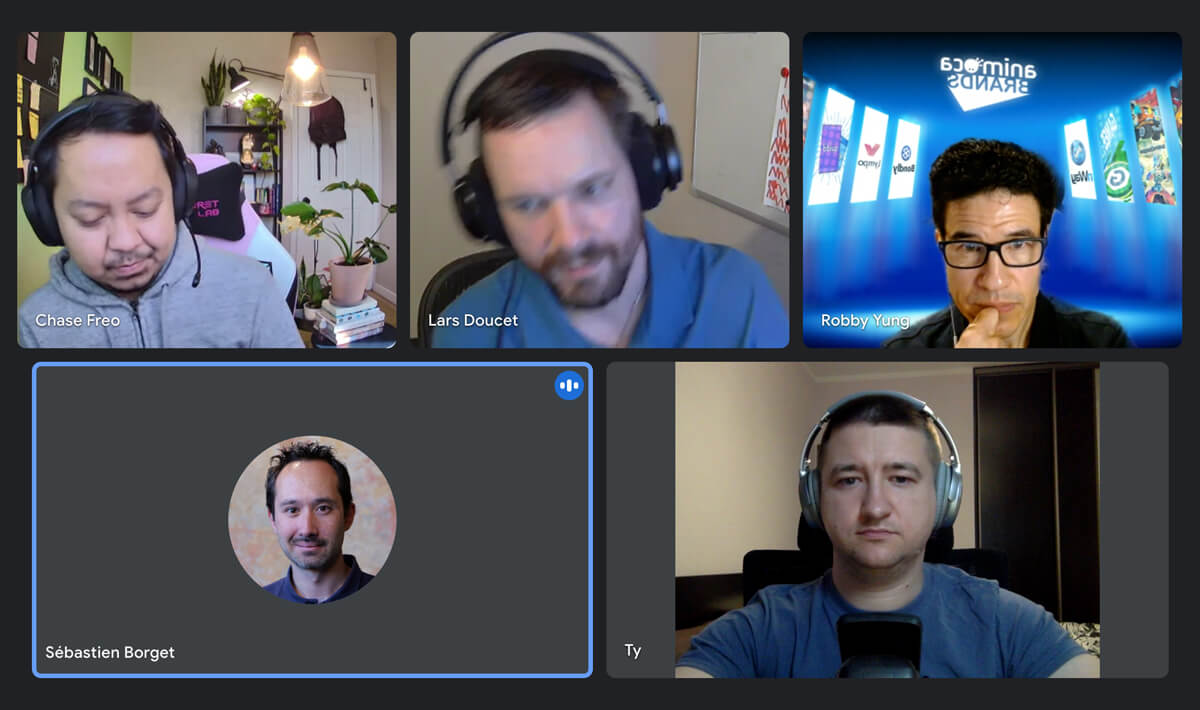 We were welcomed by Dean Takahashi - the author of a whole bunch of articles I’ve posted in the Gamedev.js Weekly newsletter over the years, with about one every two weekly issues on average. Anyway, even though it was suppose to be only an intro call, we already had a good discussion about the topic.

Well, that was a lot of events packed in one month - definitely more than I expected, but had fun and learned a lot from every single one of them!