For the very first time since 2010 I was able to finally mix two of my passions: building web games and playing Neuroshima Hex. 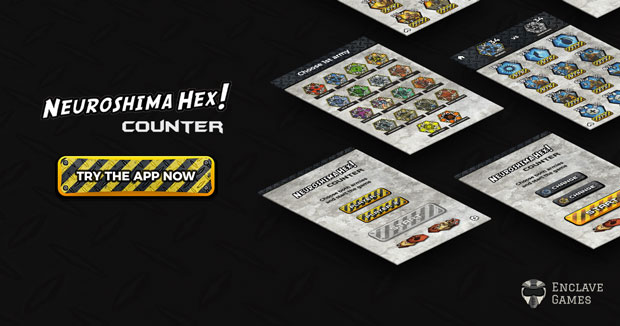 The NeuroshimaHex.pl fan site started in 2010, and Enclave Games as a brand became a thing around 2012, although I’ve played with the concept of creating HTML5 games a little bit earlier than that. But I still needed almost a decade to be able to do a proper collaboration.

NSHex Counter is not even a game, but rather an app built using a game framework (Phaser v3 to be exact). It’s a highly specialized application for specific task, created for the Neuroshima Hex board game community.

If you participate in the Neuroshima Hex Championships that happen for a few years now in Poland, every detail is important. And since this game is affected by randomness of the tiles you can get in your next turn, people started counting different types of tiles they, and their opponent, gets throughout the game.

If you’re skilled enough you can try to remember them all in your head, or write them down on a piece of paper, but both approaches can be troublesome. So…

Behold, now you can yell “there’s an app for that!”. And it’s a web app, so you’re not limited to any operating system - as long as it can launch a browser, your phone is good enough to run NSHex Counter.

The app itself allows you to start a game between two armies and keep track of the current situation by checking out the tiles both sides have already drawn. Now you won’t have to remember if key tiles were already used, and how many of them your opponent still have. Also, the remaining ones have percentages next to them so you might predict what comes next.

It is a simple app, but serves its purpose well. We already have plans for more: Randomizer will randomly select armies for 2-4 players, Roulette is our own digital add-on for the physical board game we prototyped years ago, and Aftermath is an entirely new and independent web game set in the world of Neuroshima Hex.

The development itself took way longer than expected (as usual), and instead of a week it was more like two months, even though it’s rather simple creation. You can see the slow progress in my 100 Days of Code daily reports. Well, js13kGames happened in the meantime - go figure.

Anyway, if by any chance Neuroshima Hex is your thing, then keep your eye out on nshex.enclavegames.com as more apps should be published soon.