The history has come full circle - I was invited to become a judge in js1k, the same competition I was partly inspired by when creating my own, js13kGames. 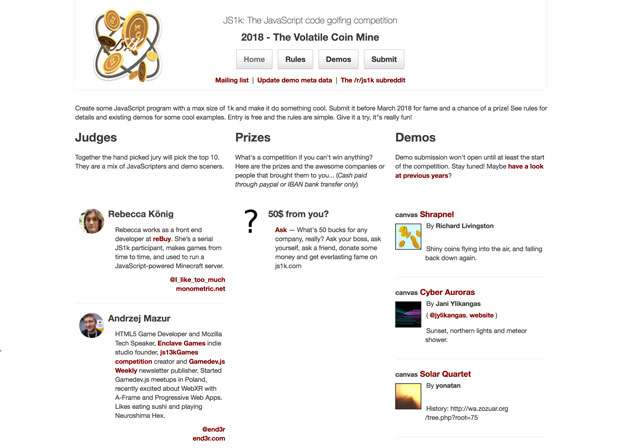 The js1k started in 2010, and js13kGames followed two years later, in 2012. Both are about code golfing - you have to squeeze your source code within a tight size limit. For js1k it’s 1024 bytes, for js13kGames it’s a little bit more: 13 kilobytes, zipped. In the second scenario this means an architectural challenge of figuring a way to build something small within the size limit rather than squeezing single bytes. On the other hand, if you’re good at js1k, you’ll have a little advantage when participating in js13kGames.

I’m not a code golfer myself, I wouldn’t probably be able to build anything interesting in 13 kb, not to mention 1 - I hope that’s not a huge surprise for you. It’s interesting to think that, among all the options, I am the one who made js13kGames reality. My impostor syndrome is still strong, so sometimes it feels very weird, even though I don’t hide this fact at all.

js13kgames organizer @end3r said he could help too.
that would be an interesting link between our two best js codegolf contests :D

Anyway, I will be judging js1k entries this year, so you can be more than sure I won’t give you extra points for nifty code golfing tricks, but rather focus on the overall impression. I hope that’s enough for you - I’ll definitely do my best to judge all the entries fairly.

If you’re into trying to fit a small amount of bytes into something visually appealing, be sure to submit that to the js1k 2018 competition - this year’s theme is Coin Mine. I’ll be super happy to judge your submission.