Even though the js13kGames competition ended, there’s still plenty of work to be done. I did manage to do some other things in the meantime though. 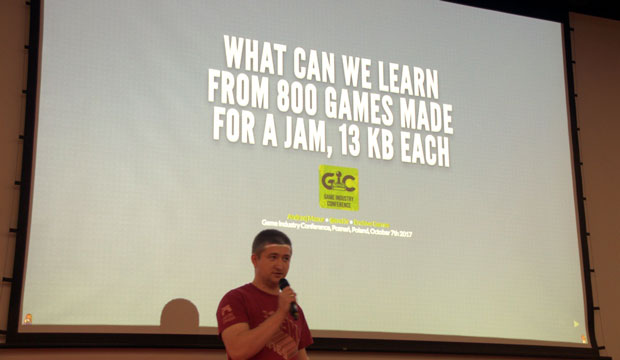 Although the job itself was completed earlier, it was October when I published the blog post about the Facebook Messenger game for KFC. There was also the usual API integration work for publishers, delayed because of the js13kGames competition.

Nothing interesting this time. Still trying to find the time to work on the MDN articles.

Quite successful month. At the beginning of October I was talking about lessons learned from js13kGames at the Game Industry Conference 2017 in Poznań, organized Gamedev.js Warsaw #8 in the middle of the month, and give a talk about A-Frame for the students of the Academy of Fine Arts in Warsaw at the end of it.

Still js13kGames - right now both pringting houses (t-shirts and cardboards), preparing the digital prizes to be sent to the winners (finally), and all the other missing bits and pieces, but it’s getting there.