I had a break from traveling around the world and speaking at various JavaScript conferences for the past few months, but decided to jump back and give two talks last week.

Both talks were given at the 4Developers conference that happened on April 11th in Warsaw. The event had 15 (!) different tracks, so I decided to go with the flow and talk about two topics at once: A-Frame on the front-end track and earning money on HTML5 games on the gamedev track.

It was my first approach to 4Developers and I wasn’t sure what to expect. I heard the conference was focused on Java and PHP, so talking about front-end or gamedev was a little bit risky. It ended up being a very positive, interesting experience, with one personal achevement being successfully unlocked.

Those who know me also know I’m not a great public speaker - I started from being the terrible one and I’m trying to improve my skills as much as possible over time. I overcome a lot of issues, but the recent problem was that I looked like someone sent by the company to talk about boring stuff, even though I was excited like crazy on the inside. So, this time I tried to focus on expressing my excitement and it looks like I finally made it. Videos from both talks should be posted soon, so there will be a chance to validate those claims. 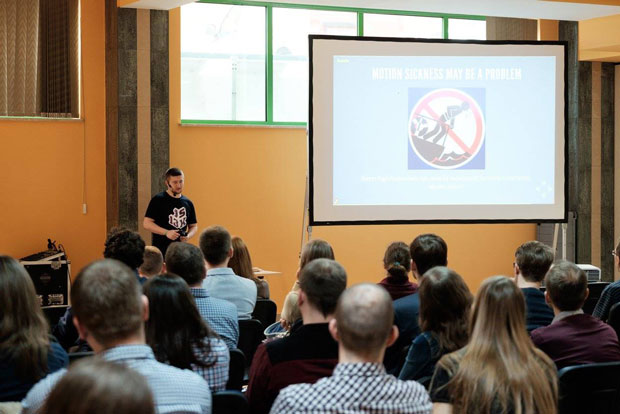 The interesting thing was the rooms for my talks weren’t huge. I’d say front-end track had a regular one and gamedev was a tiny room for a few lost souls located at the very end of the venue. Surprisingly enough, even though there was more than 1000 attendees that day, I managed to get both rooms filled with people. Nice!

While waiting for the videos check out the slides:

If you happened to be there I’d love to hear your honest feedback, thanks!

* First photo thanks to SpotkaniaIT.