Meet.js Warsaw and the Virtual Reality for the Web

After my talk at the meet.js Lublin about the Gamepad API last month I decided to try something new. I wanted to give a talk about WebVR for some time now, but didn’t want to start without the proper setup. It ended up exactly how I wanted to avoid it: I gave a talk without the working device.

We met at the Gazeta.pl place - this time there was around 100 people and we had free pizza thanks to the Lunchroom team. Damian Wielgosik talked about his crazy visions of the JavaScript future and Tadeusz Piskozub gave a talk about his experiments with WebGL. The second talk was a great intro to mine as you first build a 3D scene with WebGL and then make it work for VR. I gave the third talk and the last one was about browser rendering optimization by Alex Kachura. 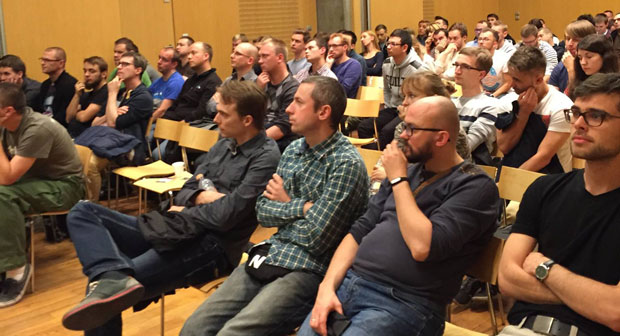 It was my first ever slide deck about WebVR after so many talks about HTML5 games, Firefox OS or Gamepad API. I had my Oculus Rift working at some point, but the only thing I could show was the disconnected device. I couldn’t bring my PC, my MacBook was lagging and the laptop not powerful enough to run the demos smoothly. I decided to talk about it anyway - I hope to have the working setup really soon. After all it’s a lot better to just show the immersive, impressive demos instead of talking about them. I really hope people enjoyed my talk as much as I did and I got them interested in my experiences with this new technology. 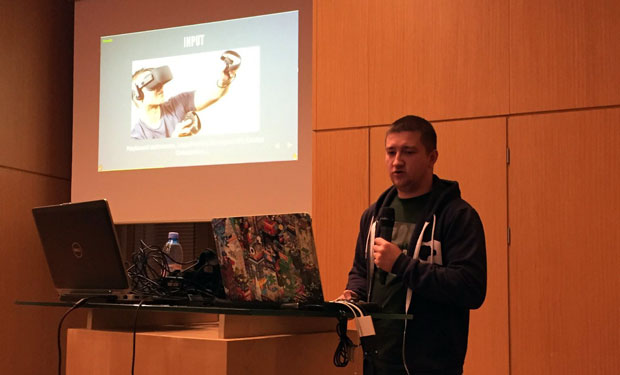 I’d like to push the Device Lab idea further and do a proper WebVR Demo Day in Warsaw around October and November and show the demos to everyone who would be interested, but no idea if and how it could end up.