My first ever trip to South America lasted a week and ended a few days ago - thanks to Mozilla I was visiting Porto Alegre for BrazilJS, the biggest JavaScript conference in the world. Theme for this year was the ninetees (with Power Rangers and Back to the Future) as JavaScript just turned 20 years old, and all the breaks were filled with metal music.

The conference itself happened in a huge shopping mall called Barra Shopping Sul. We took over the ground floor while above us the shops and restaurants worked as usual. It was interesting to see the huge space filled with people, stage on one end and the booths on the other. 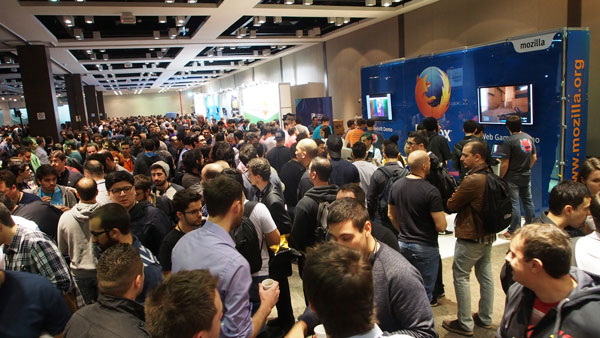 I was running the workshop about building mobile HTML5 games with Phaser the day before the conference, on August 20th - there was around 10-15 people during the workshop (event was free, 30 people reserved the ticket), everything went smooth. I had 4 hours for that and was able to live-code the whole game in the available time having the last 30 minutes for questions and general gamedev discussion.

It was great to see people were really interested in the particular steps of the workshop. I interacted with them, asked questions, we were figuring out the solutions or how to fix (planned) bugs that occured. Andre Garzia helped me a lot when people had issues or questions as few of them was speaking English just a little bit - which didn’t prevent them from finishing the workshop. 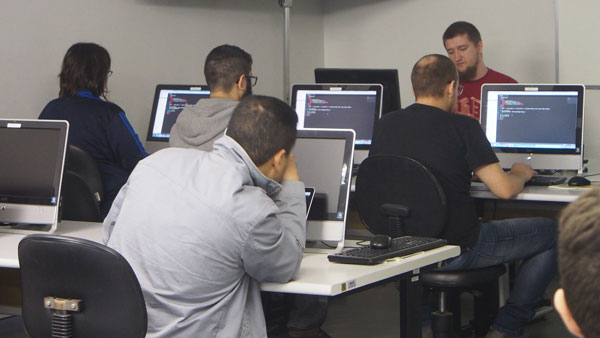 At the end there was a small competition to modify the Breakout game we just created and add something extra - I had a few great additions like the second paddle, bonus points or changing the background color on every brick hit. We gave the t-shirts and stickers away to all the participants, I pointed them out to my Content Kit I used during the workshops and the tutorial articles that are available on MDN.

The speakers list was impressive: Brendan Eich, Chris Heilmann, David Bryant, and many others. Nick Desaulniers also gave a talk about improving game performance on the Web with WASM, SharedArrayBuffer, SIMD and WebGL2. Some talks were in English while others in Portuguese, but the live translation was provided to those interested. I was focusing more on managing the booth rather than the talks, but the ones I saw were really cool. 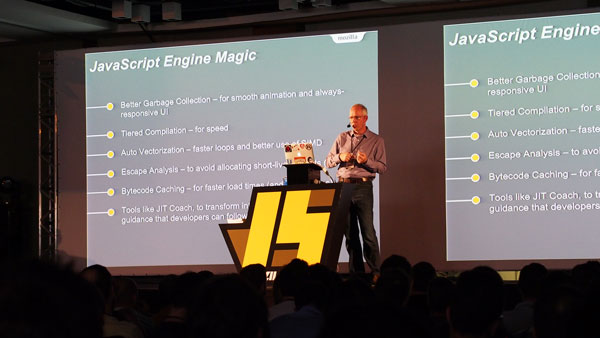 Nick also did an amazing job taking care of all the hardware for the booth, giving us a quick training on the VR and managing the whole demoing. I demoed VR a bit, but was spending most of the time at the Games stand. There was many people coming and asking questions, it was great to talk about the technology, and the future of web gaming. There was a lot of devs saying they just started building games with Phaser. 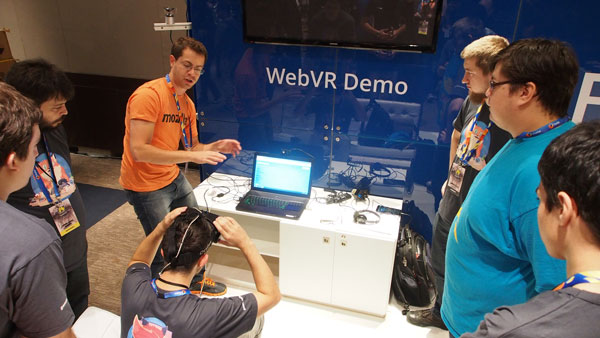 I have a few follow ups - devs that are interested in building games for the web. We had a lot of support from the local community, our booth had many mozillian volunteers who helped make it a huge success. 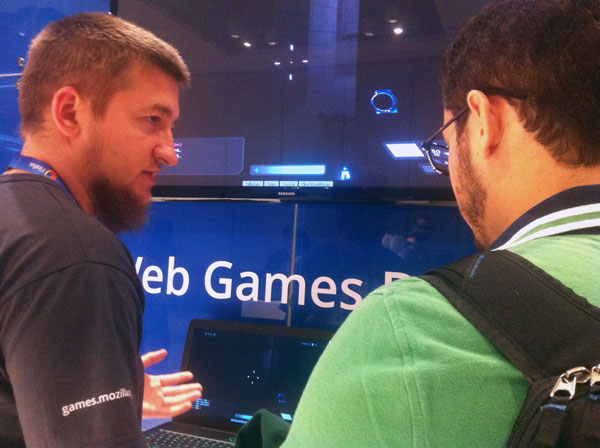 The VR stand was busy almost all the time with long line of people waiting to see the demos. Having good coffee at our booth helped a lot - it was the same effect as during the Mobile World Congress in 2014. People standing in line for the coffee were looking at our demos and then approaching us with questions and will to test both games and VR. It was so crowded and loud that the organizers had to separate the stage and the booths with temporary, movable walls to be able to run the talks. 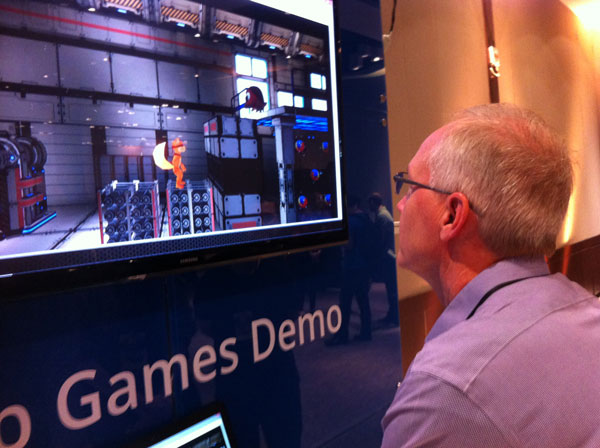 The food was delicious, especially the different types of meat. After the first day we had the speaker’s dinner in a place called churrascaria. It was a mix of eating and discovering the local culture - there was a show on stage while the waiters were walking around with huge sticks full of various types of meat and slicing pieces to our plates. I don’t remember eating so much meat in one evening, and it was so good. Especially picanha with salt or garlic, and the dessert - white pineapple dipped in cinnamon. Plus the famous drink caipirinha made with sugar cane liquor.

When the conference was over there was a huge JavaScript cake for everyone to eat, and the beer started to be served. We had a dinner with fellow mozillians and returned at the end of the party with the live band playing rock covers. I was in the mosh pit with Nick, and Chris Heilmann stage dived. It was epic. 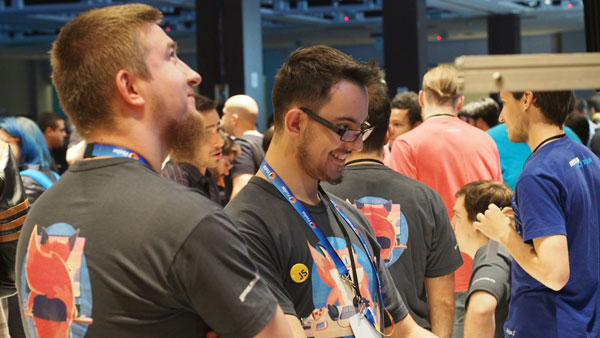 It was suppose to be a nice and easy returning flight home, even though including three different planes and the overall time of around 24 hours. When I started in Porto Alegre I already had problems in the hotel, where it was hard to leave the place because people were so excited about the probably famous football team that stayed in the same place. Then at the checkout they wanted me to pay for the already paid room, but I managed to get past that with some remote help from Andre and Guillermo. Then the whole security checks on the Rio airport happened a few times on my way to the plane, but I ended up in economy premium, which was a lot nicer than the usual economy seat I expected.

It would be a long and boring flight, but we had some small technical issues with the electronics and because of the procedures we had to have an emergency landing in Recife with the fire trucks, ambulances and all the other equipment. The fix was done quite quick, 20 minutes tops, with duckt tape and the screwdriver, but we had to wait almost 4 hours for the confirmation that we really can go. I ended up being late for my connecting flight to Warsaw and had to spend a few extra hours waiting on the Paris airport. The trip started on Sunday morning in Porto Alegre and ended up on Monday late evening in Warsaw, one hour before midnight. 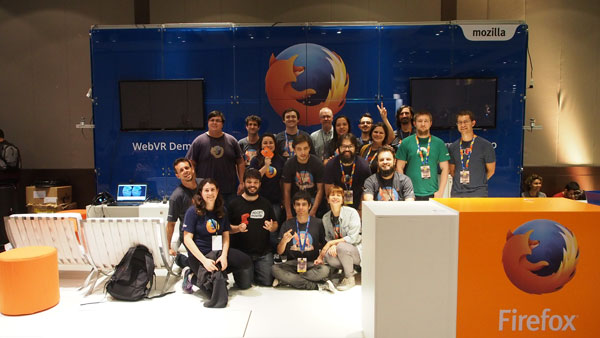 It was worth it. Awesome food, great people, crazy party, proposal from the organizer to his girl (she said yes), running a workshop and the booth, talking with game devs for three days - it all ended up as one incredible experience, I’m so happy I went there! Mozilla have a very strong community in Brazil.