Full Immersion - the making of

The story behind Full Immersion is way shorter than those about Monser Wants Candy and Hungry Fridge, but I think it’s still worth writing a word or two.

In April I decided to participate in Ludum Dare for the first time. I picked the Jam, because I could use existing resources instead of doing everything on my own, which is the rule of the Compo. Ewa did some graphic design for a game she was working on and I came to an idea that it could be used in the Jam. The game we were originally planning to do, Full Immersion, was about a yellow (or orange, depends on the angle you look) submarine and a little fellow with one eye. No, not the pirate, just a regular one-eyed guy. Well, kind of regular – he’s a sailor. So the Ludum Dare theme was “beneath the surface” – it would be a shame not to enter as the idea fit perfectly. 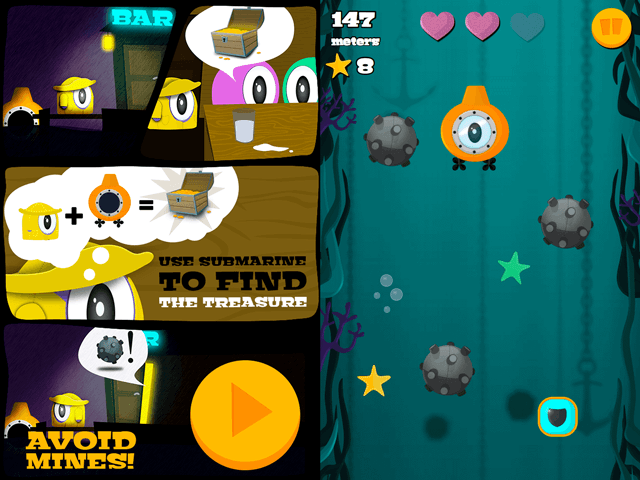 I was struggling with myself whether I should even start, because I didn’t have any experience with Ludum Dare before. I made my mind almost two days after the 72h Jam started, so I had little more than a day, but I was able to build the prototype with Phaser in such short time. The problem was that I focused on the wrong thing: loading, menu, story and how to play screens, but the core mechanic of the game was very poor and you couldn’t even replay the game, because the mines were spawning like crazy. It was obviously a failure in the terms of competition, but at least I built the working prototype of the game.

You can play Full Immersion here.

As part of the “let’s finish all unfinished games” project I was able to close the development process of Full Immersion quite quickly – it’s July and the game is ready. It is simple, yes, but this is another finished project on my list. The next one is quite challenging: Wizard Quest. Yes, the one I had almost ready two years ago and tried to develop it from scratch a few times. This time I’m gonna focus on it, work hard and just finish it without any distractions. If I do, I’ll be able to cross it from the top of my gamedev TODO list and at the same time win a few bottles of beer from a couple of bets with my dev friends. After that I’m free to pick any fresh, new project I could imagine.

So, how do you like the game? Any feedback will be, as usual, greatly appreciated.