The Mozilla Festival in which I participated was held during October 25th-27th last year, but I was quite busy lately and didn’t have time to post on this blog regularly. I’m still amazed by the event, so decided to write it down even though it was more than 3 months ago.

I was talking about Firefox OS and HTML5 games at some conferences already, but this time I had the chance to run a two-hour workshop during the Festival. I was surprised by the number of projects and people involved and fell in love with the atmosphere. It was great - you could just start talking with a total stranger and it was normal. You could ask for anything and everybody was so helpful. I never talked with so many strangers and never met so many positive people in one place, it was magical.

The venue was huge - we took over the whole Ravensbourne campus right next to the O2 Arena and North Greenwich tube station. There was 9 floors full of Mozilla-related projects. Every floor was overwhelmed with passion and people that shared their knowledge with anyone interested. It would take days to visit every booth and talk with every single person there. I mostly stayed at the top floor where all the games were hiding, we had all the game development related workshops and sessions there.

My presentation had the “one and only” (used so many times before) title Abusing Firefox OS and HTML5 games for fun and profit, though I change and adjust my slides every single time I’m speaking. I just suck at figuring out good conference talk topics, so just stick to the few ones I like. I’ve showcased Monster Wants Candy demo which was built using Phaser and prepared for the Firefox OS devices and Firefox Marketplace. I had a small group, so I could focus and work with them directly rather than just talking to the crowd. Don’t know how it ended up from their perspective, but from mine it was quite ok as for the first timer. 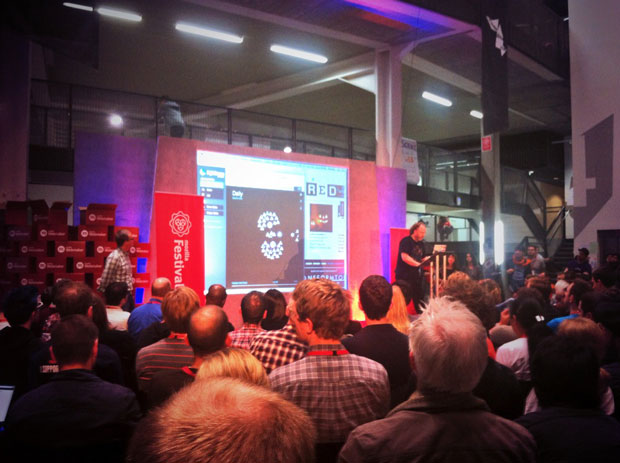 The trip to London had an emotional value for me as I was visiting the city 6 years earlier in totally different situation - trying to get a job and earn a few pounds, struggling with the situation, then working like crazy. Now I was spending my time in a hotel in the city center and I could just enjoy London as it was from the tourist point of view. I’m very thankful to Mozilla for inviting me to the Festival - I met so many awesome people and spent great time with them. It was truly a unique experience and I encourage more people to go there if you only have the chance!