The second edition of the first ever fully HTML5 games conference - onGameStart - has just ended. It was a great experience and I’m happy I was part of it. Thanks to Michał I had the chance to speak about the js13kGames competition which ended just a few days ago.

Three days of HTML5 games fun started with the workshops. There were three to choose from - ”Architecting canvas platformer game” by Peter van der Zee and Kornel Lesiński, ”Let’s learn how to make a 3D game!” with Jerome Etienne and ”Building HTML5 Games with BikeshedJS” run by Nikolai Onken. I took the second one about 3D and the use of tQuery - it was a good decision. I already attended the first workshop (the platformer game) at Falsy Values conference last year. Jerome showed the possibilities of WebGL, use of Three.js mixed with the logic and simplicity of jQuery code. Thanks to this building 3D games was fun and easy. We’ve seen the different kinds of demos with the source code behind it, and at the end had the Minecraft-like multiplayer game with chat working.

Being a speaker gives you some neat benefits - you can meet and talk with all the other speakers during the dinner. Me and my wife, Ewa, was having a great time talking with Robert Podgórski - pixel artist, CEO of Black Moon Design and a cool guy. I wanted to get back pretty quick so I could finish the slides for the next day. 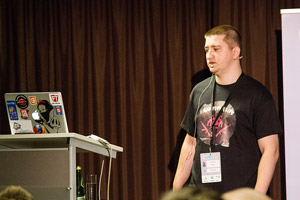 There were so many interesting talks the first day that I should say something about every single one of them, but it would be just too much writing. I’ll instead focus only on the most outstanding ones. Michał Budzyński opened the conference with his talk about the current state of the HTML5 games. The unquestionable star was Seb Lee-Delisle, who made an awesome performance on the stage, where slides and the topic wasn’t even important - the same kind of show Chris Coyier gave at Front-Trends earlier this year. Szymon Piłkowski presented the more complex solutions to the rendering problems of games on Canvas. There was Robert Podgórski, who explained the best approach of a pixel artist to become rich and famous. Will Eastcott showed us the one of the most interesting game demos this year - a 3D FPS in a browser with good graphics and working smoothly, all of this made in just two weeks!

13 simple steps to create a compo

I talked about the js13kGames competition the first day, presented some facts and tried to give some useful tips and tricks to people who want to take part in a competitions like this, where the size is limited. There was a little bit of info about minifying code and assets, using procedural level generation or generated audio. You can check the presentation for yourself, it’s online: 13 simple steps to create a compo. I also announced the winners of the competition at the end of the talk - you can check the winners on the js13kGames website. The unquestionable winner was the SpacePi game by Jack Rugile - congratulations!

After the first day of the conference there was an official party where you could find one of the speakers being a DJ - it was Emeric Florence. I didn’t stay long, because was exhausted by the last days of working on js13kGames competition and preparing the slides the night before. Thanks to some sleep I was quite refreshed the next day.

The next day was full of interesting talks. I’ll try to describe those which stuck in my head, but again - all of them was great. There was Richard Davey who showed the facts about getting money from HTML5 mobile games. Andres Pagella talked about his tool for creating 3D models in CSS - Tracy. Then there was a bit late Kamil Trebunia, with borrowed MacBook, talking about physics engine and going stratght into freestyle live coding with… the code used the day before by Seb! Kamil had some problems with it, but after all managed to get an awesome result and an applause from the crowd. The vocabulary helped a lot (types of bodies, balls touching, penetration etc) and the whole session was just laughing hard every minute. Quite interesting presentation about Firefox OS gave Staś Małolepszy and Zbyszek Braniecki.

I really love the idea of an Open Web operating system written in HTML5 and JavaScript. The last talk was a keynote - Jordan Mechner showed the history behind Prince of Persia, one of the most succesful and recognizable games ever. His speech was very emotional, even Jordan was barely holding back his tears. It was about failures, which could end up as the best things to happen, because everything influence your life one way or another.

After the conference ended there was an idea to have another party, the after-after one. It was friday after all, so why not? It ended up a lot better (and later) for me than the previous one, and I could sleep how much I want, so the end of the onGameStart was quite good.

There were those great, customized t-shirts with your own pixelated self! Apart of being IN the game on onGameStart website of course. The food was tasty, the place very cozy and nice. The atmosphere was awesome, we could just talk all day with all the most important HTML5 gamedev people in the world. Everything was just amazing and Michał Budzyński, the event organizer, deserves the standing ovation for what he did. Thank you so much, and keep up the good work, see you in 2013!

To the sponsors - if you failed to support this incredible event you should be ashamed of yourself. But cry not, there will be the next edition and you should start thinking about it right now. The open HTML5 gamedev community is growing and taking the market of mobile games, so the importance of such events will only grow. If you can’t wait a whole year for the next event you can try and visit the onGameStart US that will take place in New York city on March 22nd 2013. Don’t miss it!