The conference is over and I’m missing it already - it was a blast, continuous party with amazing people! I even forgot about some of the talks, because I was partying and talking with so many amazing people, both speakers and attendees. Everybody that I saw speaking or writing about the event was expressing positive impressions. Can’t wait for 2013!

We started at the Opium pub and had a great time talking and drinking. It was a chance to meet and spend some time relaxing before the main event.

I woke up quite late, my head was reminding me of the party from yesterday. I was at the venue around 9:40 and there was a problem - huge line of people waiting to be registered. I think it was the only bad thing at the conerence during the whole time (the second one was stolen camera), so it can be easly noted to have it better next year and move to the more interesting stuff. 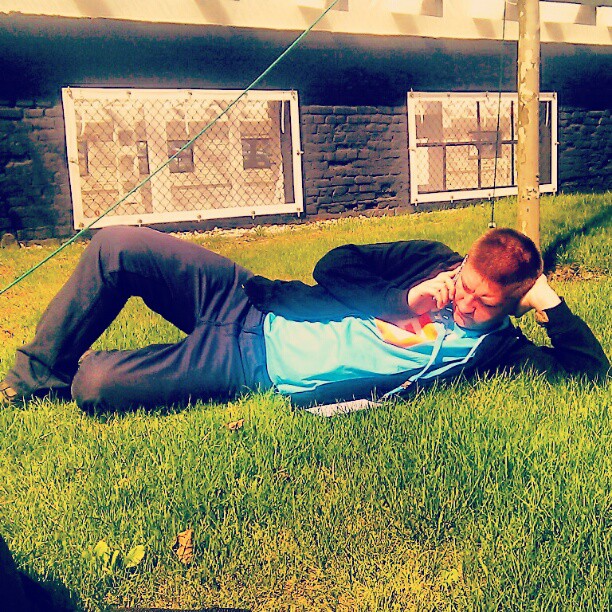 The conference started with a delay, so the first speaker was Vitaly Friedman who showed us brainstorming process in “Responsive redesign: Smashing Magazine’s case-study”. The next talk gave Chris Coyier, who should be brought to some comedy TV show, cause he had just awesome appearance and contact with the crowd. He showed us “What we don’t know” - some info about the visitors on our websites, the screen resolutions and so on. Fun part of the slides was “the Dude”, a regular Internet user. David DeSandro in his “Mobile Safari: bring your machete” talked about working with the Safari browser on mobile devices and ways to debug it. Rebecca Murphey, although she was sick and had some problems with speaking, gave a talk and it should be noted, that most of the speakers would cancel their talk. Rebecca did a great job and showed us “Patterns for organizing non-trivial JavaScript applications”. Harry Roberts talked about “Breaking good habits”, I totally agree with not using IDs for styling. After the lunch Daniel Biesiada from Microsoft in “HTML5, Internet Explorer and Windows 8” said something that caused a lot of talking - there will be no IE10 for Windows 7? Only Win 8? This was quickly denied by the Microsoft, but the discussions were still flooding the Twitter. Up next was Jina Bolton to talk about “Style guide-driven UI designs with Sass”, there were some interesting stuff that will be put in CSS4 in the future. After that Alex Russell appeared on stage and presented the topic “Web: platform or pile o’ hacks?” in which he showed the web as a platform for websites and applications. Kyle Simpson talked about “HTML5 JavaScript on crack” where he merged all of the most interesting HTML5 APIs into working environment. Lea Verou showed us “CSS in the 4th dimension: not your daddy’s CSS animations” where she managed to posess the time, there was some CSS4 magic too! Then there was Julien Gachadoat with his “Mind the gap” talk about the power of JavaScript. At the end of day one there was two community talks: Zbigniew Braniecki showed us Boot2Gecko in “The web is the platform - Mozilla’s mobile OS” and Mariusz Nowak talked about the “Future of web applications, where client doesn’t need server”.

The party started after the talks and the place with the live bands playing for us was in the same complex of buildings. They played very nice, there was of course a lot of beers to grab, the smoke and lights helped to build a great show, but most of the people were standing outside of the building - it was too loud to talk. Some guys started a contest of some kind with the obvious theme of drinking the beer (hey, it was a Beercamp after all!), but I’m not sure if you had to do it when you win or lose. Maybe both. There was more and more people around them and they had a lot of fun.

The Oyatel guys was very helpful and gave us free ice cold soft drinks - just what was needed after the party. But the drinks came with a price - Pain Station. Incredible machine of fun and pain - it was just a simple Pong game for two players, but if you miss the ball you were punished by whip, heat or electricity on your hand. The more tough the players were, the longer the game and louder yelling. It was a great idea of fun and torture, at some time it was so crowded that you couldn’t even see the players.

The second day of talks was great too. Started with Krzysztof Szafranek, who gave interesting talk “Refactoring JavaScript - big bang theory?“. Then there was Tali Garsiel with somewhat controversial talk “How browsers work internally” - some of the attendees were tweeting that it was boring, others stated it was great. For me it was quite interesting to know how this works under the hood. After the break Olov Lassus gave some useful insights in the “JavaScript: the subsets we use”. Rachel Andrew with her “Pushing the boundaries without breaking the web” was quite good too. After another break Mathias Bynens showed us “10 things I didn’t know about HTML”, a very helpful collection of facts. Divya Manian were talking about “Designing in the browser”, which was quite good stuff about the design. After the lunch Luca Sale from Blackberry gave super fast talk about “Alice.js: a lightweight independent CSS engine”, just to have some time to give away 5 PlayBooks to the lucky winners. Alex Giron with his “Same flash different code” looked like he was totally pissed off at everybody who is doing HTML5 demos right now, because all of this was already done using Flash 15 years ago. Most of the attendees after his talk was just shocked with a big “WTF?” on their faces. Tiffany Conroy showed us how to “Design processes, not interfaces” and it was quite interesting even for me - someone who is not a designer. I think the next talk was one of the best at the conference, and one of the most original: Bartek Szopka showed us the idea of “Learning to teach”. There was a discussion about not using minifiers to help others learn from our code and I think on the websites with a low traffic this should be done that way. The last speaker, John Schulz, gave a simple introduction to Node.js with his “How to node?” talk.

Let me know if you find the missing presentations!

Organisation of the event

It was definitely the best conference I ever attended. Don’t get me wrong, I realy loved onGameStart last year and I think the topic for me was a lot better out there than on Front-Trends, but hell, Front-Trends this year just kicked ass at every possible aspect of the conference! The food was great, there was also some sandwitches for breakfast, juices all day and cakes after the dinner. If this wasn’t enough you could drink beer from day one during two days of the conference. The Wi-Fi was working fine for me all the time (although some people had problems with it), and this is very hard to achieve - every single conference I was attending had some issues or the Wi-Fi was not working at all. The weather was just awesome - we were just laying on the grass and resting, drinking beer while sitting in the shadows. This whole place had an amazing industrial feeling that helped build the atmosphere even better. The live bands during the party was playing very nice and everyone enjoyed the warm evening. I think Damian Wielgosik and Paweł Czerski are top class organizers and did outstanding jobs doing everything for the attendees to enjoy the conference. I can’t even thank them enough for the days they lost preparing everything. Thank you guys!

It was the very first time I was asked for the interview. I was quickly interviewed about the event and just wanted to say so many things, but stressed a lot and just said that the event is great. I hope some of it is worth showing on the video, but if not, then it’s a sign to prepare better next time. It’s the second “first time” with Front-Trends, cause the 2010 edition was my first conference as an attendee.